Irrespective of the remarkable claims made by Indian telcos of offering blazing-fast internet experience, India is found to have the lowest 4G speeds among the 77 countries examined by OpenSignal. The average download speeds of 6.1Mbps in the country are over 10 Mbps lower than the global average that increased from 16.2Mbps to 16.6Mbps in the last six months. However, it is spotted that in spite of the global increase, no single country has cracked the 50Mbps barrier in terms of average 4G download speeds.
On the part of the availability of 4G networks in India, OpenSignal states that its users in the country are able to connect to a 4G network over 84 percent of the time, an increase of over 10 percentage points from a year earlier. This brings the country ahead of more established regions in the 4G landscape including Sweden, Taiwan, Switzerland, and the UK. Among the key mobile operators offering 4G services in the Indian market, Reliance Jio is claimed to be leading the 4G availability race by offering its LTE signals 91.6 percent of the time, whereas other operators didn’t manage to score more than 60 percent in the tests conducted by OpenSignal.
But notwithstanding the growth in the availability, 4G speeds don’t seem to be meeting the growing demand. OpenSignal considers “network congestion” as the prime reason behind the slow 4G speeds. “As 4G adoption rose, and more and more consumers subscribed to 4G speeds, the networks experienced congestion, resulting in a decrease in average download speeds across the board,” the wireless coverage mapping company wrote in a blog post. 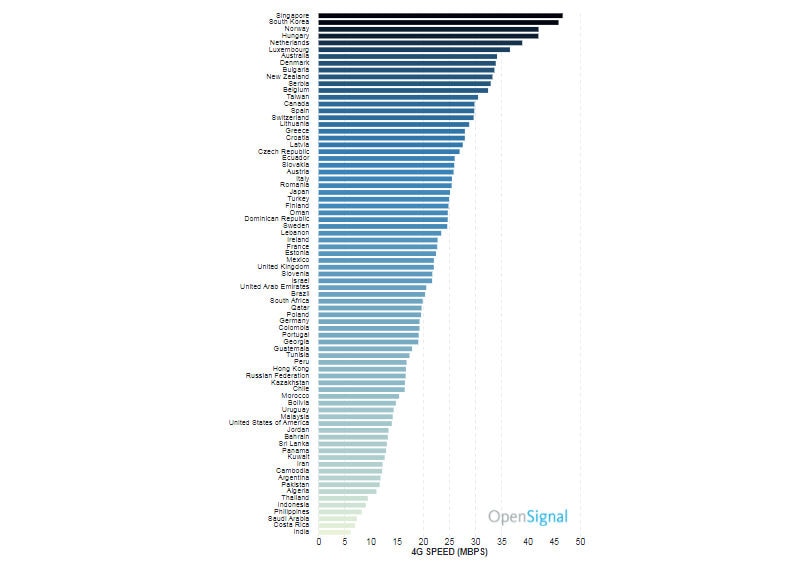 Subscribers on 4G operators including Airtel, Idea, and Vodafone all are said to have witnessed a drop in average 4G download speeds in 2017. However, OpenSignal claims that Jio subscribers had the opposite experience, with a whopping 50 percent increase in their speed from 3.9Mbps to 5.8Mbps over the course of six months following the end of free services.
OpenSignal foresees a bright future of 4G networks in India in 2018 with the expected consolidation of the telecom market to help operators combine their spectrum holdings and adopt technologies such as LTE-Advanced. These developments would result in some increase in the existing average speeds available to end consumers. Further, the company projects that the country will “gradually move away” from being a developing 4G region to become a “full-grown 4G power” next year.
Globally, as per the November report by OpenSignal, South Korea is leading the 4G availability front with over 96 percent of consistency in accessing 4G networks. But when it comes to the fastest 4G speeds, Singapore comes at the top with an average download speed of 46.64Mbps, followed by South Korea that has 45.85Mbps speeds, as per the OpenSignal report.
OpenSignal says it used more than 50 billion measurements collected from over 3.8 million smartphone and other mobile device users to compare 4G availability and 4G speeds in 77 countries around the globe.